The highest quality of products

A guarantee of a good investment

Strona główna » About us

For over 24 years, Jarstol company has been created by people with passion for the furniture industry. Full of energy, enthusiasm and the desire for personal development. We focus on communication and partnership as well as mutual respect. We strive for the common goal of satisfying our customers and building a positive future for each of us. 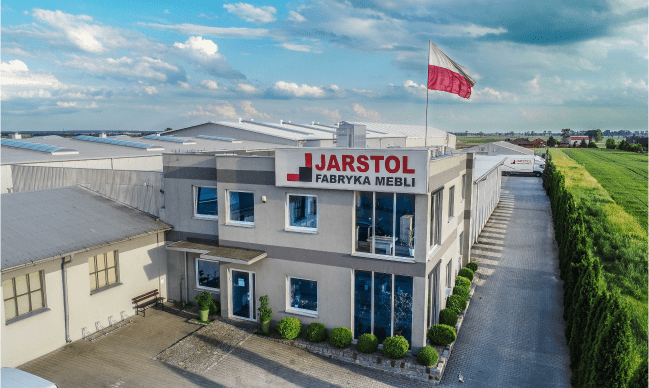 First thought and dream of starting your own business. At the beginning it was very distant, as is the view outside the window, it would seem almost impossible to achieve. However, Jarosław Linka as the teenager believed in his own abilities and decided to pursue his ambitious goals.

He decided to become a carpenter and began apprenticeship. Who would be a better teacher than his own dad? He shared his experience and creativity with him. Open to clients’ ideas, they carried out their projects together. These were the so-called “Mish-mash” services.

The company started in 1997. Garage, saw, hand drill and iron for ironing the edges of the furniture. That’s how it was that time.

The idea of selling at the market turned out to be a hit. For 7 years, working 7 days a week. It was hard, but persistence in striving for success helped to reach the next stage of development.

The construction of the first hall was a real breakthrough. As a result, the production capacity and place to work have increased. The company focused on creating furniture systems that quickly became real bestsellers. Therefore, new halls were built from time to time. Of course, the increased sales also required expansion of the technical base. Today, twe have machines at the highest level, facilitating and improving each production stage.

This year is the 25th anniversary of the “JARSTOL” company. It was a time of enormous development, hard work, perseverance, but also extraordinary satisfaction and success. May the following years be as fruitful as the past ones.

The vision of our company is to “create furniture tailored to the changing human needs and external conditions.” What do we mean? We want to constantly learn and develop. We see changes that take place both in the lives of individuals and the whole of society. We take into account the factors that influence it. The world is rushing forward and does not allow itself to be looked back. That is why our assumptions are so flexible. We know that the company’s success is largely influenced by the ability to adapt to the prevailing conditions. We are vigilant observers and we analyze the changes that surround us. We strive to implement ecological solutions with the lowest possible impact on the environment. As users of this planet, we feel responsible for it. By using the highest quality materials, we make our products enjoy functionality and beautiful appearance for years. We know how important every meter of space in our house or apartment is. So we learn how to make the best use of it. We are also seeing changes in the pace and way of life between generations. We do not favor any age group and treat each of them with the utmost respect. Due to this fact, our offer is addressed to all age groups. We also focus on optimizing the production process. We are constantly developing our technical facilities by purchasing new machines and tools. However, all our assumptions would not be possible without the people who make up Jarstol. Therefore, the most important thing for us is human. By creating an atmosphere of mutual respect and partnership, we work towards common goals. We give the opportunity for personal development and achieving smaller and greater successes. We look proudly at our past and look to the future with enthusiasm and an open mind. We believe that our company will have a strong, unquestionable position in it.

Do you want to work

Do you want to work in a team full of people with passion and willingness to develop? If so, please contact us. We will achieve success together.

GO TO THE CAREER TAB